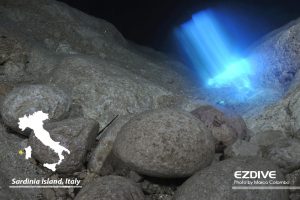 Photo and Text by Marco Colombo

Sardinia Island, at the heart of Mediterranean Sea in southern Europe, is a famous area for tourists and also for scuba divers and snorkelers: very clear waters, plenty of dive sites and colourful life on the sea floor are enough cues to attract thousands of people every year.

However, fewer know about the enchanted beauty of the underwater caves on the northwestern coast near Alghero, an ancient fortified town established many centuries ago. There, the rocky coast with white calcareous cliffs stretches for tens of kilometres, while inside the Capo Caccia-Isola Piana Marine Reserve lies a real jewel: ancient rivers carved the rocks creating a maze of rooms and tunnels that are now under the sea level. And, in these alien-like environments, life thrives.

Scuba-diving in these caves requires a certain amount of preparation but, in fact, most of the beautiful dive spots are not only for a speleologist: a sport diver, with several dives on his logbook and a good level of preparation, can be guided by local operators and discover secret scenarios and wonderful animal encounters. The conditions of temperature, darkness, nutrients and currents create particular environments, making it possible to see creatures at depths of 30m that usually live at around 80 metres. The area is surely a hotspot of biodiversity but also a must for marine biologists and underwater photographers. 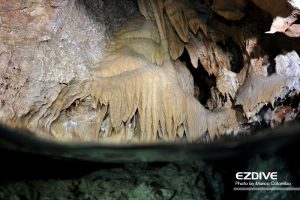 One of the biggest cave complexes in the Mediterranean lies in this area, Nereo cave. With three main entrances and hundreds of meters of tunnels and gigantic rooms, it is surely among the most beautiful diving sites in the whole basin. This is the realm of crustaceans: tens of boxer shrimps (Stenopus spinosus) hide in the cracks of the walls looking for conger or moray eels (Muraena Helena) to clean their mouth from food remains, helped by very long pincers. Other species of cleaner shrimps like Lysmata seticaudata, thrive in the darkness, while very small leptomysids (Mysidacea sp.) swarm in front of the lights held by divers. Crabs are the bottom dwellers living inside this cave: the sponge crab (Dromia personata) detaches sponges from the rocks and uses them as a camouflage; squat lobsters (Munida rugosa) usually living in very deep waters, show their beautiful shapes in the widest tunnel of the cave by hiding among pebbles on the bottom. Not all the inhabitants are small: huge spiny lobsters (Palinurus elephas), European lobsters (Homarus gammarus) and slipper lobsters (Scyllarides latus) can be found when exploring the cave in different seasons.

Another representative group of animals living in these environments is molluscs: colourful nudibranchs) will delight passionate scuba divers with their unbelievable patterns, signalling their disgusting taste to predators. Shiny cowries (Luria lurida, Simnia spelta, Erosaria spurca) feed upon cnidarians and sponges mainly near the entrances but hide from direct light and become more active at night. Sometimes a bit of luck reveals the beautiful giant triton (Cymathium parthenopeum) with its leopard-like mantle, feeding upon bryozoans.

When you visit the underwater caves, you will notice a sort of differentiation in the population of animals from the entrance to the deepest parts: near the blue windows, light assures the presence of photophylous benthic animals, while in the dark, sciaphilous animals live by escaping from the sun. Colourful tube worms reside on the walls, filtering the water on the roof; branches of precious red coral (Corallium rubrum) grow slowly for decades, protected from reckless collectors selling them for jewels. Among them, a little red goby (Corcyrogobius liechtensteinii) is really abundant, even though it was once thought to be very rare, just because scientific collecting methods in past times couldn’t reach caves. Now, underwater activities and photography have unveiled a completely hidden and mysterious beauty!

One of the most inspiring caves in the area is Grotta dei Fantasmi (Ghosts Cave), whose name comes from the 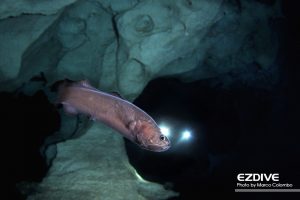 completely white, empty walls and ceiling. This is one of the few Mediterranean spots where it is possible to meet the brotula fish (Oligopus ater). This fish has very deep-living relatives, but it is the only one of its species living in shallow water and always inside very complex caves. Nowadays, we only know it lays eggs and probably feeds upon crustaceans.

Another interesting thing about these caves is the conservation of ancient finds: in Grotta dei Cervi (Deer Cave), bones of deer living around 8,000 years ago can be seen inside the rocks of the inner pool. Another secret little cave hosts the skull and a few bones of the very endangered monk seal (Monachus monachus), once common there, but now extinct. 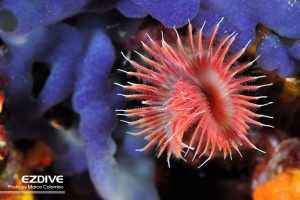 Capo Caccia-Isola Piana Marine Reserve is located nearby Alghero and reached by flight to Fertilia Airport.  For more info about the reserve: www.ampcapocaccia.it

Euro. Possible to pay with card on request. 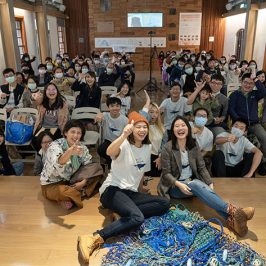 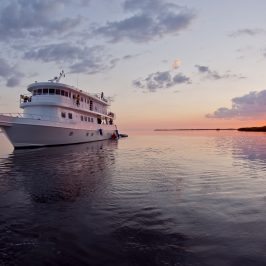 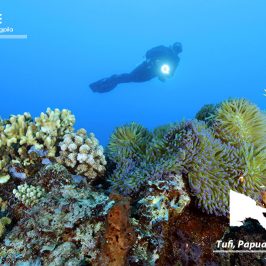