While sea turtles are a favorite amongst scuba divers and snorkelers, many people are often surprised to learn that six out of the seven sea turtle species on earth are either endangered or threatened. With the oldest fossil dating back to about 150 million years ago, sea turtles are more ancient than the dinosaurs, which became extinct sixty-five million years ago! Although sea turtles have been around for a very long time, they are now at risk mainly due to human activities. 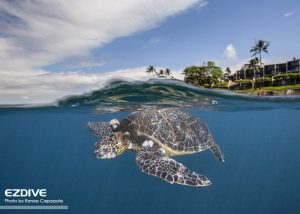 Sea turtles are fascinating marine animals! Found in tropical and subtropical seas throughout the world, they live in diverse habitats. It is estimated that they live approximately eighty years in the wild and take twenty to fifty years to reach sexual maturity. It is thought that only one out of one thousand hatchlings will make it to adulthood. Since they are reptiles, they need to breathe air and can hold their breath up to five hours, although they usually breathe every five minutes or so while feeding. While adult sea turtles are mostly herbivorous, juveniles are carnivorous and prefer to feast on jellyfish, crustaceans, fish eggs, molluscs, and sponges. The largest species of sea turtle, the leatherback, can weigh up to nine hundred kilograms and can dive up to one thousand meters!

Migrating thousands of miles to mate and lay their eggs, sea turtles often return to the exact beaches where they were born to reproduce. Females will mate with several males and store their sperm for a few months, which helps to maintain the genetic diversity of the population since a clutch of eggs will have several fathers. Most sea turtles nest twice in a breeding season and can lay anywhere from fifty to three hundred eggs. Unlike mammals, the females do not exhibit any parental care of the eggs or the hatchlings once they are born.

Generally speaking, sea turtles are calm and photogenic animals. They often accommodate encounters with scuba divers, especially in areas that divers frequent visit. It is important to always approach them slowly to not scare them away and to never touch them. Dive sites with known ‘cleaning stations’ are also terrific places to interact with sea turtles as they tend to stay put in one small area while getting ‘cleaned’ by other fish. This symbiotic relationship between the turtles and the fish benefit both parties, where the fish get food by removing algae and parasites from the turtles’ shells.

Sea turtles help to balance healthy ecosystems around the world. For example, they love to feed on seagrasses by trimming only the tops of the leaves and leaving the roots, which not only improves the growth of the seagrass but also helps to normalize the habitat. Without turtles around, the seagrass becomes old and starts to decompose, encouraging the growth of algae, microorganisms, and even slime mold! The hawksbill turtle also helps to save coral reefs by eating certain sponges that can destroy the corals. Likewise, leatherback sea turtles dine on jellyfish, which balances the marine ecosystem by controlling the jellyfish population. Without these turtles, the jellyfish would increase in numbers and would over consume the larval fish they eat, making the fish population crash.

Climate change is causing some major troubles for sea turtles. Surprisingly, sea turtles don’t have sex chromosomes like mammals do, and their sex is determined by the sand temperature around the nest. With warmer temperatures, the sand becomes hotter, and hotter sand means significantly more females than males. Generally, twenty-nine degrees Celsius and above will produce females. At Ingram Island in Australia where there is the largest population of green sea turtles in the Pacific Ocean, a study found that 99% of the sea turtle rookery were females! Since it takes so many years for sea turtles to reach sexual maturity and because only a very small percentage of their offspring reach adulthood, they are a very fragile species in terms of their reproduction. 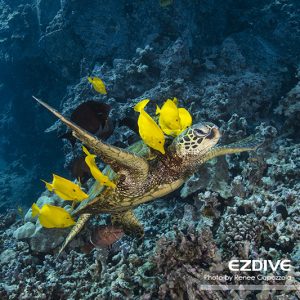 Humans pose the greatest danger to sea turtles. Turtles and their eggs are still hunted for food in certain countries and their shells are sold to make jewelry and crafts. Pollution, fishing nets, trawlers, habitat loss, plastic ingestion, and the illegal trade market all contribute to putting sea turtles at risk throughout the world. For example, the IUCN Red List classifies the hawksbill turtle, or Eretmochelys imbricate, as ‘Critically Endangered’ and the green sea turtle, or Chelonia mydas, as ‘Endangered.’ Under the Endangered Species Act, sea turtles are given legal protections in the United States. Likewise, some regulations are global such as the ‘Convention on International Trade in Endangered Species’ or CITES, which controls international trade in endangered and threatened animals. Sea turtles receive protection by all nations that have signed the treaty. Many different countries must come together and share the responsibility to give and enforce stronger legal protections throughout the world or we will lose these ancient dinosaurs from our planet forever. 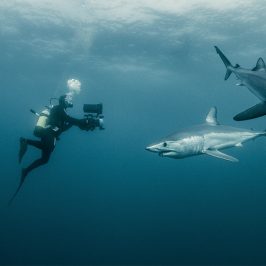 As they are the fastest shark in the ocean, encounters with these remarkable predators may...