Overwhelmed by the beauty of humpbacks in a documentary, the dream of intimate contact with these big guys finally came true in Tonga and Fiji. 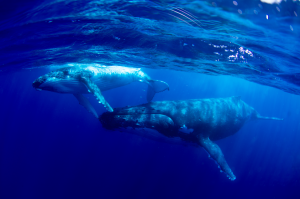 Text and Photo by Yinan Liu

Mummy humpback whale hovered above the seabed with her the young calf close of her side. The dive guide gestured us to wait patiently by the other side of its mother. The young calf, not unexpectedly, ascended slowly to take a breath of air at the surface, and then dutifully returned to its mother. 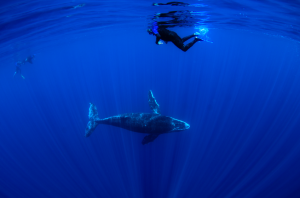 We were asked to be patient. The calf does not have as great a lung capacity as its mom and had to change air constantly at the surface. This time, possibly out of curiosity, it headed toward our direction and almost crashed into my camera. But after a super-close examination that satisfied the both of us, it went back to its mother.

After 15 minutes, the mother ascended with the calf. Although we were not that close to its mother, we could rather clearly, see the features of her beautiful body. As the pair started its decent, the dive guide signaled the second group of Japanese tourists to take their position. These whales did not leave the site until noon.

That was the first day of our trip, the boat set sail at 7am when the captain spotted the humpback mother and calf in twenty minutes. We tailed the pair from afar as we kitted and waited in earnest for the dive guide’s instruction. On command, we jumped into water calm and tranquil waters and stayed on the surface looking down at the wonderful spectacle.

The annual humpback whale congregation in Tonga happens annually in June and July where they neither feed nor leave until their calves grow strong enough to fend for itself.

In the afternoon, we sailed to the open sea and could oftentimes see humpback whales breathing on surface without intention to stay, giving us no chance to enter the water. We went back to shore after a two futile hours but not before a visit to a cave along the way back. This counts as a perfect diving day for me!

The next few days flew by uneventfully, however, on the last day we were treated to a series of surprises that dazzled and awed. We encountered a herd of eight whales on the surface, got to meet a humpback whale family of three underwater, and caught the sight of humpback whales that incessantly breached. All of which made for a happy ending for our Tonga experience.

After Tonga, we arrived in Pacific Harbor in Fiji for something even more exhilirating. The only two shark dive shops on the island took turns to operate every other day, at different sites and on different itineraries, so we decided to switch from one shop to another over the next four days.

The first shop offered feeding of bull sharks by hand. All kinds of sharks would vie for the prepared bait, and before the arrival of sharks, groupers as large as the sharks would also partake in the feast but not when the sharks make their appearance.

We all knelt down against the safety of a stone wall to watch the sharks while our dive guide fed them on the other side. The best shooting position was to the left of the guide. Divers carrying big cameras are allowed to go over the wall for an unobstructed shoot, while another dive guide would keep watch with a big iron bar in hand for protection. Bull sharks were pushed away several times when it pushed against my camera. To be honest, when the giant bull sharks came up so close, I felt adrenaline levels surging. 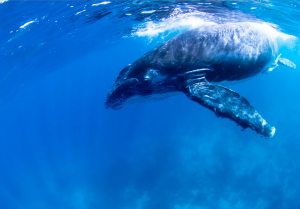 The second operator conducted shark feeding in two phases: In the first, divers hid outside a stone wall at 25 meters. Inside, the dive guide fastened a big bucket of tuna head with a rope, and pulled it slowly along the wall. The bull sharks would closely follow the scent of the bucket as it swims by in front of our eyes. In the second stage, we ascended to a shallower position to see the dive guide feed smaller sharks such as black tips and gray reef sharks.

After four days of adrenaline driven shark diving, we boarded a liveaboard that sealed Fiji’s reputation as the capital of soft coral. My one-month journey was glorified with too many happy memories with giant animals. Snorkeling with the humpback whales fulfilled my long-awaited dreams. 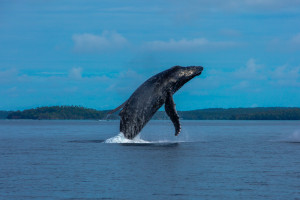 From Nadi International Airport there is a flight to Vava’u every Saturday via Fiji Airlines. Alternatively, you can fly to Nuku’alofa (the capital of Tonga) first and transfer to Vava’u.

A chartered car can take you to Pacific Harbor from Nadi in about three hours. Pacific Harbor is also quite close to Suva, the embarkation place of most liveaboards in Fiji.

Tonga and Fiji are both visa-free.

The official language of both Tonga and Fiji is English.

USD is accepted and ATMs are available.

Tonga and Fiji both use flat three-pin plugs. 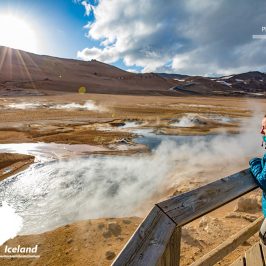 There is one place in the world where you can dive between tectonic plates: Iceland.... 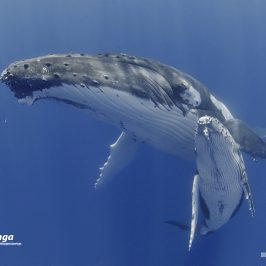