As they are the fastest shark in the ocean, encounters with these remarkable predators may be short. However, they leave a great impact on divers because a mako sighting is not always a guarantee on pelagic shark dives; and divers travel great lengths and spend copious hours at sea in the hope of finding one.

The divers are hovering in the blue with the chum drum hanging at 5 metres as a focal point on a pelagic shark dive. The pace and atmosphere underwater suddenly change among the blue sharks. A more dominant and faster predator darts through the chum slick, circles around to have a sniff of the drum in the hop that there will be a sustainable meal, then darts back into the deep, pelagic blue. Some divers are left slightly puzzled while others are ecstatic to finally have had an encounter with a Mako shark!

Mako sharks are often described as a more compact version of the great white shark, and as a matter of fact, both of these predators fall under the Lamnidae Family and are referred to as mackerel sharks. While they share similar characteristics, they do not share the same level of grace and poise underwater, but there is more to these skittish and speedy sharks than meets the eye.

Here are five reasons why mako sharks are such impressive predators:

Did you know that out of all sharks, Mako sharks carry the largest brain-to-body ratio? This gives them the benefit of having extremely powerful social skills and critical reasoning. While other sharks need electroreception to navigate the oceans and sense prey, Mako sharks solely rely on their instincts like smell, hearing and vision. This often results in them being incredibly successful hunters.

Mako sharks are obligate ram ventilators. This means that they breathe oxygen from the water that washes over their gills. If mako sharks stop swimming, they die, so instead of sleeping, they have periods of inactivity to rest and restore their energy. This is another reason why interactions on dives with makos can be short.

Mako sharks make up the five species of endothermic sharks, meaning that these sharks can regulate their body temperature internally and ultimately be considered as warm-blooded animals. It is believed by researchers that one of the reasons why Mako sharks are so fast is because they are warm-blooded. Being warm-blooded results in stronger muscles and more efficiency, which helps them release a lot of energy with more ease.

Mako sharks require a lot of energy in order to swim long miles, which makes them opportunistic hunters. They have a diverse diet that includes fish, other shark species, dolphins, seabirds and ocean mammals. They will eat any resources that they can get and store the energy for times when it’s tough to find prey.

Once mako sharks find prey, they will begin to stalk them by swimming beneath them. With the help of countershading, they effortlessly blend into the depths. When the opportune moment comes to attack, they will rapidly lunge upwards and begin by biting chunks off their prey followed by circling back repetitively until the prey is immobilized and they can finally feast! Having countershading to their benefit, their prey rarely gets to anticipate an attack and that means that mako sharks are rarely injured while hunting.

When and where to dive with mako sharks?

Being pelagic sharks, Makos are known to cover great geographical ranges, however, there are only a handful of destinations in the world where divers can have a reliable opportunity to encounter with these incredible sharks.

The Azorean archipelago is made up of 9 small volcanic islands and sits along the Mid-Atlantic Ridge, a mighty underwater mountain range that cuts right through the middle of the Atlantic Ocean. During the summer months of July to October off Pico island, dive centres like CW Azores offer pelagic shark diving trips where blue and mako sharks can be encountered.

Rhode Island may not be the first destination that comes to mind when you’d think of pelagic shark dives, however, during the summer months, the gulf stream moves closer to shore and becomes an oasis for Mako sharks among other sharks.

Approximately 40km offshore from Cape Point, Simonstown, there is a band of warm water where fishermen often find tuna, and where there’s tuna, there is an opportunity to see pelagic sharks! From October until May, operators like Shark Explorers offer day trips in search of Mako sharks.

Cabo San Lucas is considered a top destination for pelagic shark diving. Right off the shore, divers can find some of the highest concentrations of Mako sharks. Dive centres offer shark diving expeditions 7 days a week year-round, however, it is recommended to go during January and May.

Mako sharks fall under the species of pelagic sharks, this means that these sharks can travel the water column for days to weeks without seeing any other forms of life, never mind food. To attract any species of pelagic sharks, boat operators have to use chum to create a chum slick hoping to attract a shark down the chum line. This means that the waiting period for sharks can take anywhere between five minutes to five hours, so be ready and prepared to wait.

Once a shark finally arrives, it can come in fast and that can feel overwhelming. A clear and strict safety briefing is done before leaving the dive centre, follow the briefing and listen to the divemaster.

More importantly, have fun and take in every moment with these incredible animals! 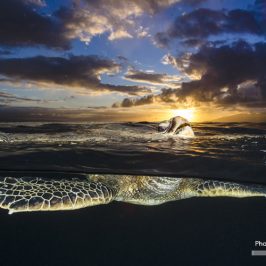 While sea turtles are a favorite amongst scuba divers and snorkelers, many people are often...